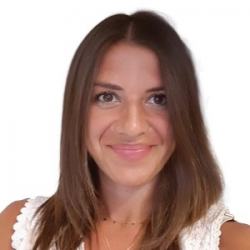 Francesca Lunardini received her Bachelor’s and Master’s Degrees in Biomedical Engineeering at the Politecnico di Milano. Her collaboration with the Nearlab started during her undergraduate program with a study on children affected by dystonia. Her interests toward pediatric movement disorders led her to Los Angeles where, in collaboration with the Sangerlab of the University of Southern California and Children’s Hospital, she worked on her Master Project “The effect of vibro-tactile biofeedback in childhood dystonia”, which was awarded with the highest grade.
In November 2012, she was awarded a ministerial scholarship and she started her PhD in Bioengineering at the Politecnico di Milano. Her PhD Thesis was co-supervised by Professor Terence D Sanger of the University of Southern California. Francesca’s doctoral program mainly focused on methods and electromyographic-based technologies, namely biofeedback training and robotic control, to study and train motor learning and motor control in children affected by movement disorders, with particular attention to dystonia and cerebral palsy. Francesca received a PhD cum laude in Bioengineering in May 2016.
She then moved to Northeastern University (Boston) for a post-doc fellowship in motor control supervised by Professor Dagmar Sternad. Here research topics included the use of Transcranial Magnetic Stimulation (TMS) and the analysis of muscle synergies to investigate motor learning of complex tasks.
In April 2017, she moved back to Nearlab for a postdoc fellowship in the framework of the MOVECARE project (Horizon 2020) to develop a multi-actor platform for transparent monitoring and assistance of the elder at home.