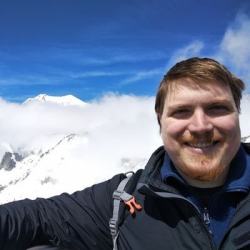 Alberto Antonietti has completed his Ph.D. in Bioengineering in May 2018 (cum Laude), working at the Neuroengineering and Medical Robotics Laboratory of Politecnico di Milano, where he has started his research career in 2013.
He carried out his MSc Thesis in the framework of the European project REALNET, developing the neurorobotics interface to test spiking neural network models of the cerebellum, in collaboration with Prof. Egidio D’Angelo at the University of Pavia and with the group of Prof. Eduardo Ros at the University of Granada. After his graduation, he started his Ph.D., working on computational neuroscience topics related to motor learning, in particular on the cerebellum. He has leveraged the realistic models of the cerebellum to investigate the effects of Transcranial Magnetic Stimulation (TMS) on cerebellar learning. The modelling efforts improved the knowledge about the effects of cerebellar TMS on neural processes, suggesting that a main effect on the cerebellar cortex triggered also a compensatory response in the deep cerebellar nuclei.
During his Ph.D., he spent 4 months at EPFL and Blue Brain Project laboratories at Geneva to do an internship. He worked in the framework of Human Brain Project (HBP), collaborating in the generation of an integrated version of the cerebellar model in the whole point-neuron reconstruction of the mouse brain. From this collaboration, Politecnico di Milano started the HBP Partnering Project CerebNEST. In 2017, he have started another collaboration with the Danish Technical University (DTU), for the exploitation of the cerebellar network to control other robots (e.g. the fable robot). He is the PI of a project (LSC56-HP10CLALBD) of the Italian supercomputing consortium CINECA, proposed to carry out heavy neural simulations.
His contribution to the neuroinformatics field has been recognized by travel grants and awards, among those the “Massimo Grattarola” Price, for the best Ph.D. dissertation in Neuroengineering in 2018.
Actually, He is working as a Postdoctoral research fellow, with interests not limited to computational neuroscience topics. He have also participated in other two national projects (ABILITY and USEFUL), focused on technologies for people suffering from neuro/muscular diseases such as dementia and muscular dystrophy.
He has been active in scientific communities of neuroinformatics and bioengineering, participating in major international conferences, invited talks and serving as reviewer and technical program member for various journals and conferences. He is also an active member of scientific societies (IEEE, GNB, NEST Initiative) and of the EU Alliance on Artificial intelligence.